Throughout generations, so many innocent people have been discriminated against because of their race. To reinforce privilege the world indicated that being “white” makes part one of a preferred/superior class. It sounds ridiculous, but it’s an outgoing social problem. Why does this notion of whiteness persist? Look around and see why the concept of whiteness is promoted everywhere in our environment.

Throughout the years, race has still been used to maintain power and control in society and to reinforce whiteness as cultural standard. To clarify, beauty is something that is extraordinary when one values the unique aspects in something or someone. However, in this world, we define beauty by light skin. We see that majority of the people try promote “whiteness” around us. Don’t believe it? Well let’s take a look at what history has for us.

At Harper College, in the 1960’s, the Harbinger would promote “beauty” through the calendar. The students newspaper would put out photographs of “attractive” females on the Harper’s calendars referred to as “Calendar Girls.”  It may not seem bad at all until one considers the person in the photo. In the photo is a young, beautiful, white female who is stud nursing. Without thinking twice, this is one way to promote “whiteness” in society. Even the caption, shown on page 39 in the Harper College: The First 50 Years, in the calendar promotes it even more. It says, ”She’s a nursing student, a really pulsating attraction in white or among the books.” Although these photos were not controversial at the time, they reveal a history of promoting whiteness as the standard.

Now is the time for society to finally realize what is happening around us. As a society, we need to look carefully at what people show and talk/tweet throughout mainstream media, news, commercials, etc. Whether we talk about politics, religion, or the media, most people’s perception are defined by these arbitrary categories bond on skin color. Just recently, Dove had sparked controversy with one of its commercials. In the commercial, a woman took off her shirt and revealed a different woman underneath. 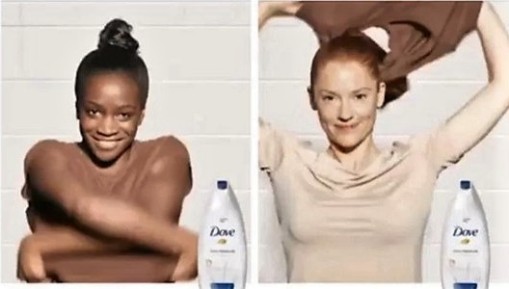 The problem was that a dark-skinned woman took off her shirt and reveal to be a “light”-skinned woman. While Dove tried to promote their products by this video, most of the people were “triggered” by the suggesting that is lighten skin is an improvement and tweeted about the commercial. These ads represent a way the media promote “whiteness.” Dove tweeted out an apology for the commercial and said they “missed the mark in representing women of color thoughtfully,” but this ad brought attention to other ways Dove promote whiteness. On one of their bottle, a lotion is described as being, “Nourishing lotion for normal to dark skin.” This is another way to promote “whiteness” by describing lighten skin as “normal”. Subsequently, Dove re-designed their product, taking off the description of “normal” on the lotion. Does Dove ever check on the messages they are sending through their ads?

Dove and Harper may have made some mistakes, but they aren’t only ones that promote “whiteness.” Other commercials, schools, and the media promote “whiteness” also. All over the world individuals and groups promote “whiteness” without realizing it. If you take a harder look around at the standards represented in the hidden curriculum in our environment, you will surely see whiteness almost everywhere.